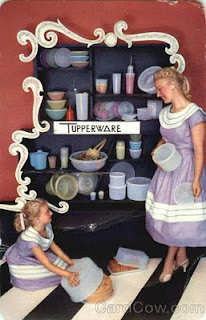 Last night, i hosted a partylite candle party and it got me thinking about tupperware parties of past. I thought, maybe i'll host a tupperware party too. after all, tupperware was the beginning of hosting parties to sell a product. For those who don't know (and that's probably most, because, honestly, who cares?) here's the abridged story of tupperware and it's parties.
Tupperware was invented by Earl Tupper in 1945. he tried to sell his product in department stores, but plastic was a new thing and consumers didn't seem to understand the plastic seal. there were door to door salesmen who were selling tupperware products somewhat successfully. this is when earl tupper hooked up with brownie wise, one of those salespeople. brownie wise is responsible for inventing the tupperware party. she had a flare for the parties, the demonstrations and knowing people. earl tupper was responsible for the product and brownie turned it into what we know today. without the two of them together, tupperware as we know it would not be.
Tupperware changed the lives of housewives at the time. it gave them the 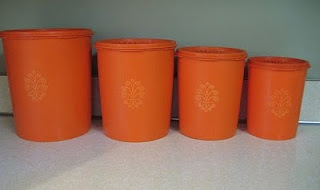 opportunity to get out of the house and earn money without interfering with their jobs at home. they weren't out selling just any product, they were selling something that they could use and understand to people they knew and understood.

so, that's all the history lesson i'm going to give you today. as i was looking this up, i started at the tupperware website to look at their products. i was surprised to see that many of them are the same. after that, i was looking for vintage tupperware on ebay. i found myself with a huge smile as i sorted through this fabulous variety of orange, yellow, brown and green tupperware. my husband had probably thought i'd lost it (and maybe he's right) because who gets so happy about sitting at home on a friday night looking for old used tupperware? while going through the products on ebay, i realized that i think my grandmother owned everything from every catalog that came out in the 1970s and probably before. i knew what each gadget was used for, no need for a demonstration. it was like stepping into my grandmother's kitchen at any point in my childhood. many of these things that i saw on ebay and that were owned by my grandmother were things that my mother also owned when i was a kid, but hers were bought in the 80s, so the colors were better. my mother favored navy blue instead of my grandmother's orange. so, it started with a candle party and ended with a bizarre obsession with tupperware. i haven't yet purchased my first piece of vintage tupperware, but you can bet i will.
all of us have attended a tupperware party at some point in our lives. today, you can have a party to sell almost anything from candles and food mixes to sex toys. unfortunatly, the internet, i think takes something away from classic parties. for the most part, you can buy products online without being invited to a party. tupperware even offers online parties. i am going to open an online party now, i think. if tupperware isn't your thing, you might consider hosting a partylite party. if you live in the area, you can contact jenn brown at http://www.partylite.biz/sites/jennmolloybrown. whatever it is that interests you, invite some girls over and keep the tradition of brownie wise alive!
posted by Brandi at 10:13 AM