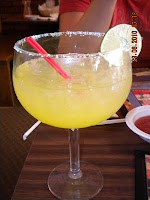 So, yesterday, I took my book for a late lunch at the Mexican restaurant.  This is something I started doing a little over a year ago.  When I think I've had enough and need some time to myself, I head to the Mexican restaurant after the lunch rush.  I think that's the best time because no one is there.  The reason I chose this particular place is because they don't speak English when there are no customers and I don't understand Spanish.  Therefore, I am not tempted to be nosy and listen in. 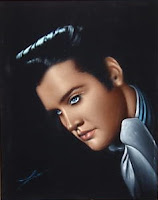 I also happen to greatly enjoy margaritas.  They have always been liberal with the tequila and I think they play a game to see how much I can drink (they obviously have no idea who they're dealing with).  Lately, though, I think they might be trying to kill me.  I get half way through one margarita and expect to pass out and wake up in Tijuana with a kidney missing.  I'll probably be in a back alley-you know, the ones that no one goes in unless they're looking for heroin or velvet Elvis paintings.  So, now when they bring me my drink, I go on about how I shouldn't drink it because of the dialysis and whatnot.
I never go on Sundays, but my husband told me I was being a...well, he said I was disagreeable, so I thought it would be a good idea.  So, this couple came in with a baby.  I'm not a fan of children in restaurants (I spent a good part of my life waiting tables).  We don't take our kids out to eat very often.  It was allot easier when there was only one kid and she behaved, but it's almost impossible to keep the 3 quiet and I know that NOBODY wants to sit next to me and my 3 kids who can only behave for short periods of time.  When they act up, we leave and then they get in trouble.  I know that NOBODY wants to listen to me scold my 3 kids.

Anyway, this couple came in with a baby who was maybe a year old.  Everyone was happy and the baby was content and quiet.  I was enjoying my book and my ruffie margarita.  Then out of nowhere, the baby starts wailing.  The parents did nothing.  I think I even heard them giggle.  This goes on for a minute, then the baby is quiet.  After a minute or two, the baby starts again.  This time, I'm almost positive I heard one of the parents giggle.  After a minute, the baby is quiet, then starts again.  Now, I KNOW the parents are giggling.  I turn around to see what is happening.  When they walked in, the baby had a pacifier.  The parents were taking it out of her mouth, holding it out of her reach and teasing her with it.  They thought this was great fun.  I almost got up and took the baby away from them, just to hold her out of their reach and make them think they weren't going to get her back.  I'm not sure which pissed me off more, the fact that they were intentionally being cruel to their kid, the fact that they were doing it in a restaurant or the fact that they were ruining my meal and my much needed alone time.  That is one couple who should be thanking their lucky stars that the bottle of tequila in front of me was preventing me from walking across the restaurant and smacking them in their heads.
posted by Brandi at 10:16 AM