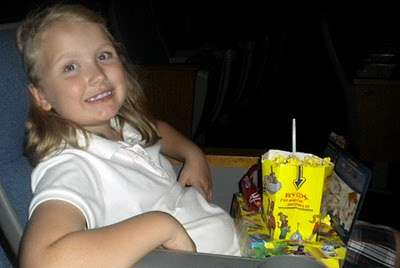 Most days, i'm pretty sure no one will ever nominate me for mother of the year, but then there are those times, i have to think someone should.

two days ago, we ran out of jelly.  big deal, you think.  the only thing corrina will take in her lunch is peanut butter and jelly sandwiches.  she won't eat anything else.  so, we ran out of jelly and i refused to go buy more.  i wouldn't buy it because i have been promising to make her favorite blueberry jelly for quite a while now.  i even took the  blueberries out of the freezer to thaw earlier this week.  so, yesterday, i decide that corrina can just deal with one of those nice round, crustless, premade pb&j sandwiches (please don't start judging me yet-save it for something better).  on the way to school yesterday, i stop at the convenience store, surely they'll sell these things, right?  wrong.  5 minutes before corrina has to be at school, i'm wondering around the damn gas station looking for anything that can substitute for a pb&j.  i bought pop tarts (still, don't start judging yet, it gets better).  now, i am ashamed and determined to get the jelly made and refuse to buy any while we were at the store.  of course, i did not have time to make the jelly yesterday.

last night, i decided to take the 2 of the girls to see a movie.  it was kennedy's first time.  after dinner, i loaded them up (corrina was still sporting her school uniform because i don't want to do more laundry than i absolutely have to) to keep them out past their bedtimes.  such a smart idea on a school night, mom.  i didn't even look in corrina's backpack when she came home from school.  since we were up too late, i overslept a little and forgot to wake corrina up for a shower this morning.  while going through her bag, i found a book that she needed to read, so i spent all of breakfast saying "come on, read and eat, read and eat".  i also discovered that today is friday, spelling test day.  we hadn't gone over her spelling words once this week because for some reason, i thought there would be an extra day.  so, on the way to school, i was shouting words back to her for her to spell.  i start to make her lunch when i remember that we have no jelly, so back to the gas station again this morning for a pop tart.  what kind of a mother am i?  one time is almost understandable, but twice?

when i got home, i was faced with scholastic book order.  this thing was due in today.  when she brought it home well over a  week ago, she wanted me to fill it out and send it back immediately.  my answer was, "it doesn't have to be back until the 24th, i promise to look at it and make an order before then".  wow, way to go, mom.  this is the moment when someone should be filling out my nomination form.

so, what did i do today?  i made jelly and filled out the book form which my husband returned to the school after lunch.  maybe i'm not so bad.  now, i'm going to remember to call the girl scout leader to let her know corrina will be at the cookie drive tonight (yes, i realize it starts in 2 hours, but making jelly is kind of a long process, i was busy this morning), then, maybe i'll make the call about the sleepover she's supposed to go to tomorrow night.  i am supermom!
posted by Brandi at 2:18 PM