I feel like i have a million things that i have to get done today, but i thought that i would take a minute to enjoy my morning caffeine and type a little something.  i haven't posted anything or done anything (the reason i have so much to do today) because i have been sick.  yesterday was the first day i was able to do anything in nearly a week.  i made it through my first trimester feeling pretty good.  i dealt with occasional nausea and never really felt any more tired than normal.  now, however, it's all hit me full force.  ok, maybe not full force, but i still fell pretty bad.  is this normal?  for this to start in the second trimester? anyway, i don't know if it's the beautiful weather we're having or maybe the sickness has just run it's course, but i feel much better today.

over the weekend, during a period when i could move, i started cleaning out the girls' playroom.  i got rid of 2 bags of toys and one bag of trash.  unfortunately, i wasn't able to finish it, so it's only about half done.  i can't seem to get in the mood to finish it.  it's amazing how the room feels so much bigger and more open just from the little bit that i did manage to accomplish.  i can't wait until it's finished.  it really is a room that i hate being in and really hate cleaning.  i'll feel so much better when it's done. 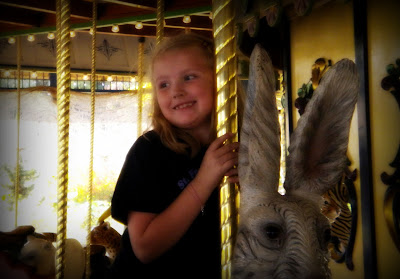 the playroom isn't the only room i'm working on.  i promised my oldest daughter that we would turn a very small playroom/storage room upstairs into a bedroom before her birthday.  right now, she is sharing a bedroom with both of her sisters (our house is too small for the amount of children we have).  she decided that even a tiny bedroom of her own is better than sharing a big one with her sisters.  i can't blame her, really.

in slightly related news (related only because it involves the above mentioned daughter), we have been dealing with the ear infection from hell.  we have been dealing with his for weeks.  it started with an ache that lasted a couple days. we treated with drops.  it went away.  a week later, it started draining.  we treated with drugs and a different kind of drops.  a week later, it turned into something i can't describe.  now, we're treating with stronger drugs until friday when i'm sure we'll be sent to a specialist.  the ear has flabbergasted the pediatrician.  for the second time in a year, i've heard her say "i don't know", "i've never seen this before", and "this is my first time".  i'm not complaining too much because they are two completely different situations.  i'm sure a lot of doctors haven't dealt with this, especially in the kind of area we live in.  the ear, though, has got me a little worried.  i think i will definitely welcome the referral to a specialist.

now that my caffeine has kicked in i suppose i should get up and do something productive. perhaps i will write a post that actually has some substance later.  until then, you're stuck with this mess of ramblings.  sorry for that.  also, next week, i will make sure to post on take care of yourself tuesday.  i've slacked the last couple of weeks because of the election and being sick.
posted by Brandi at 9:04 AM

Email ThisBlogThis!Share to TwitterShare to FacebookShare to Pinterest
Labels: about me, life