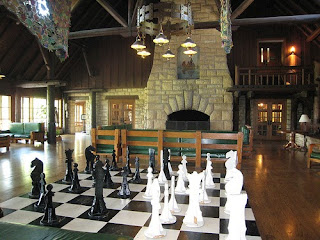 Apparently, i am not cut out to be a shut in.  i have too many children. it's insane to think that i can sit around inside with them 24 hours a day.  it's different in the summer because we can go outside and go for walks, but winter?  no way.
for a little over a week, george had been pretty much unbearable.  she spent her time screeching for her best friend daddy.  she would't let me do anything for her, she just wanted to wait for her best friend daddy.  oh, it was awful.  that girl is a champion fit thrower.
corrina (with the help of her dad, i think) spent almost a week thinking that she didn't have to listen to a word i say.  she didn't do what i asked of her and i don't even know why she asked my permission to do anything, because what her father said was what mattered.
kennedy was the only bearable one because (as she pointed out to me numerous times), she's a nice girl.

I had to get away.  i was about to lose it. so, wednesday afternoon, i drove 30 minutes to a nearby lodge and stayed there until early friday morning.  the first night was pretty nice.  i ate dinner, watched a little tv and went to sleep early.  thursday wasn't as great. i woke up too early (i am incapable of sleeping in) and could do nothing because of the ice covering the roads and sidewalks.  i had intended to brave the cold, take long walks, enjoy the fresh air and take pictures for last week's you capture.  instead, i sat in my room all day, watched some daytime tv (which is absolutely dreadful) and did a little bit of work.  the internet connection was horribly slow, so i didn't do much.  i hardly slept at all that night and was pretty anxious to get home when i woke up friday morning.  i didn't even mind the 30 minutes it took to get the ice off of my car.  i missed my screeching, back talking, nice kids.

Even though things didn't work out the way i wanted, and 1 whole day and 2 nights is too long to stay away from my mad house, it was nice to have some alone time.  the kids seem to be back to normal.  corrina seems to have remembered that i am her mother, that she needs to listen to me and show me some respect.  george went to sleep last night telling me that she loves me and i'm her best friend and woke up this morning saying the same thing.  kennedy is still a nice girl...with a cold.

what have i learned?  well, i learned that "if I ever go looking for my heart's desire again, I won't look any further than my own back yard".

What do you do when you suffer from mommy burn out?

i did not take the above picture of the lodge.  i didn't snap a single picture while there.
posted by Brandi at 12:18 PM

Email ThisBlogThis!Share to TwitterShare to FacebookShare to Pinterest
Labels: about me, family, pa, parenting