Another thing we realized that really needs to be altered is attitude.  How can I change the attitude of a 7 year old girl?  The answer is that I can't, but I can change my attitude toward her.  I realized that I have stopped treating her like a person with actual thoughts and feelings and opinions and have started expecting her to only do what I expect of her, think what I think, and want what I want.  This is not me.  I now understand why she hides from me the way she does.  I would have hidden from my mother too if she acted like this.  I have become so critical and too good at complaining.  I am becoming my grandmother, who (despite how much I love her) is kind of a scary woman.  I definitely need to be more conscious of what I say and how I react to her in order to build her self-esteem. 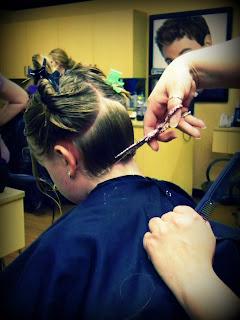 I have stopped talking about Corrina's weight or getting frustrated about the fact that her clothes don't fit anymore.  It doesn't matter to me.  I don't know if she'll be curvy when she's older or if she'll be a size 2.  As long as she's healthy and loves herself, it doesn't matter!  I love her no matter what.

One thing we fight about is her hair.  I feel like I am constantly telling her to brush her hair, telling her she didn't do a good enough job.  So, last week, she told me she wanted to cut it all off.  Instead of blowing her off or telling her no, I decided to listen to what she wanted, called my best friend and set it up.  I let her do it all herself without my input.  The result?  Super cute!  She LOVES it.  She feels better about herself and we have one less thing to fight about.  She doesn't even argue about showering now.  Apparently, having all that hair was a bigger issue than I realized. 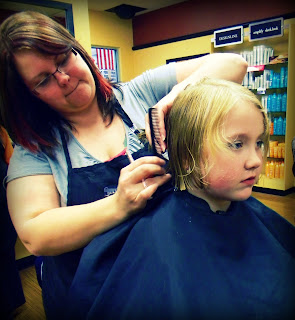 I realize changing takes time and I'm not going to try to rush it.  Realizing the problem and being willing to change is the first step.  We're making it.  Flexibility is key and eventually, I know things will fall into place and we probably won't even notice when they do.

One other thing I'd like to address is the attitude of others.  It's difficult enough as a parent to know the right thing to do for your children all the time.  It is harder when you have to deflect the comments of others from your children.  I have had people commenting on different aspects of Corrina's personality and physical attributes for a long time.  I have even had people telling me that I need to put her on a diet since she was 2 years old.  It is one thing for people to give suggestions or comments to me, but unless you are asked to do so, it is extremely rude to comment, suggest or scold my child (or any child) to her face.  I know that everybody has an opinion on parenting, but unless you are dealing with your own children, you have to keep those opinions to yourself.  I don't need anyone telling my daughter that she is fat, harping on her about eating or criticizing my parenting.  It is counterproductive and possibly harmful. 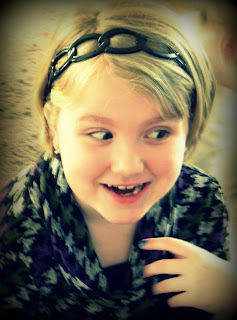 Having said that, I'd like to share some websites that provide some good information.  The Eating Disorders Information Network has some great tips for moms and dads,  KidsHealth.org and Building your Child's Self-Esteem.