State of My Pregnancy

I've been talking a little bit about being pregnant since August.  I've complained a little and shared my fears of postpartum depression.  I've tried not to let pregnancy overrun the whole blog, though.  So, today I thought I'd give a quick rundown of where things stand.
I am 33 weeks pregnant.  That means there are only 7 weeks left...maybe.  George came 3 weeks early and Kennedy was 2.5 weeks early.  This means that we could have a baby in a month...or not.  Only time will tell. 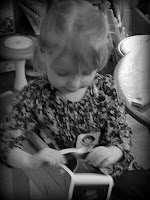 I haven't bought a single thing for the baby.  There isn't much to buy.  I did give all of my baby clothes away, so I will have to buy some pretty soon.  I think Corrina and I will probably go shopping for some things this weekend.  I will also be purchasing a ring sling sometime very soon.

The baby has no name yet.  When I was still pregnant with Kennedy, I picked a name out that I knew I wanted to give to a little girl.  Kennedy already had her name, so the name was saved for our next baby.  However, when we found out that Georgia was due on my grandpa's birthday, we decided to name her after him.  The problem is that Steve doesn't really like the name I picked out.  He can't really seem to come up with anything better, though.  Kennedy and George already call the baby by this name.  I keep telling Steve that if we change it now, it will only confuse the kids.  He's pretty sure it's something they will get over quickly.  I'm not so sure, though.  Like I said, the names he suggests are awful, but I have to keep an open mind because I wouldn't want to give the baby a name her dad hates.  or would I?  Anyway, feel free to leave some suggestions. 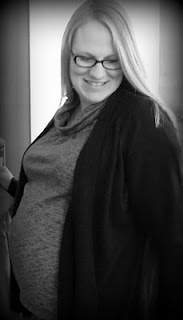 We had a sonogram today to check on the baby.  Since my first appointment, I have gained a total of 0 pounds.  I have lost 1.  So, we're just had to make sure the baby is a good, healthy size.  She is just fine, weighing in at 3 pounds 12 ounces.  It turns out, I'm just a little healthier than I was 8 months ago.  I eat better and exercise.  Overweight people tend to lose weight when that happens.  So, the baby is healthy.  The weight is going where it needs to and leaving the places it shouldn't be...like my thighs.

So, that is where things stand at this point in my pregnancy.  Everything is going pretty good.  I don't feel too awful.  It's coming quickly to a close.  Man, that was fast!

(by the way, my skin did clear up with the help of a vitamin D3 supplement, taking probiotic enzymes 3 times a day and using a concoction made of witch hazel and tea tree oil!)

Email ThisBlogThis!Share to TwitterShare to FacebookShare to Pinterest
Labels: about me, expecting, pregnancy