mommy, i want to be a hooker for halloween 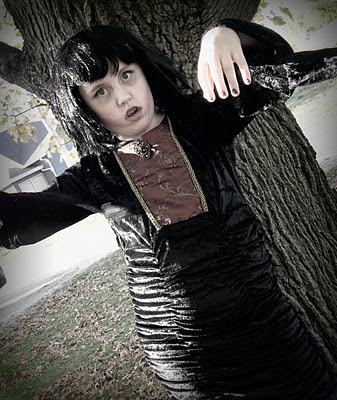 This year, I was determined not to drop the ball on Halloween.  I usually wait until the last minute to get costumes.  This year, they were going to be super cute, well thought out costumes.

Then my 2 middle daughters saw these quite pricey, cheaply made costumes while shopping with their dad.  They fell in love and would surely perish if they didn't get them.  Of course, since mom wasn't around, they got them.

Then, out of nowhere, my older daughter was invited to a costume party over the weekend.  Not enough time for a well thought out costume there either.  So, we went to the store and bought one...

So, we settled for vampire.  I'm still not thrilled with what she bought, but at least she's covered, I suppose.  NEXT YEAR, I will come up with something terribly clever.  I will make them wear theme costumes (because that's the kind of mother I am).  4 girls, 1 theme.  Any suggestions?  It's better to start now if they hope to have decent costumes next year!