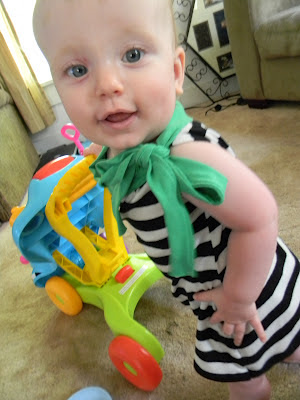 Stella turned one on April 26.  Everyone seems to think that the minute she turned 1, she should be walking and talking like she's 2.  I've been told several times over the last month that developmentally, she is falling behind (though not by her doctor, mostly just family members).

I remember when Corrina was a baby, I was constantly reading about monthly milestones and pushing to make sure she did things early.  This is yet another way my parenting has changed over the years.  I have realized that there are more important things than being able to tell another mom that my 9 month old can walk or my 1 year old knows all of her ABC's.

It is inevitable that most babies will learn to walk and learn to talk.  I feel that it's important to let them do this in their own time.  Our children are only babies for such a short time.  Why try to rush them out of that stage so quickly?  When they are older, we look back and long for the time when they were babies, when we were responsible for taking care of all their needs and being the center of their universe.

Stella is almost 13 months old.  She does not crawl.  She has never liked laying on her belly.  I could never justify putting her in that position and letting her cry in hopes that she'll teach herself to crawl.  It's not that important.  Georgia never crawled and she managed to learn to walk.  Stella doesn't walk unassisted yet.  I have been told numerous times over the last 6 months that she will never do any of these things if I don't take her out of that "thing" (her sling) and let her get frustrated.  She cruises along the furniture and walls, so I know that she is physically capable of walking when she's ready.  She accomplished these things without giving up her sling time, so I am not worried.

When she's asked a question, she will point to the answer.  She babbles and says Georgie and ball.  She is able to communicate her wants and needs with me.  I am certain that she is physically capable of hearing and speaking.  She will talk when she's ready.

This is something I apply to all children, at every age.  They will do things when they're ready.  I'm worried that by pushing them, I'm denying them some pride of their accomplishment and making them think that my love is conditional.  All children are different.  They will all do things in their own time.  Stella will be able to walk before she starts kindergarten.  Georgia will give up her binky before high school.  Kennedy will go potty by herself with the door closed before she gets married and Corrina will ride a bike by herself before she starts college.  These are things I'm certain of.