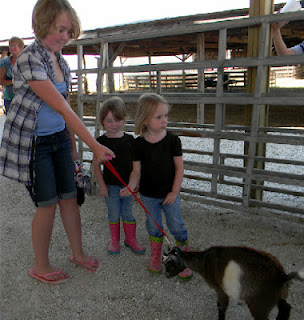 Being the mom of many girls, I feel an extra responsibility to make sure they are confident and kind.  It's difficult sometimes, given that I am not the most confident person.  Just last week I was reduced to feeling like nothing just by being in the same room with a mom wearing more makeup than I wear in a month.

So, I'm constantly questioning how I'm doing at raising confident girls.  The problem I keep running into is that the answers aren't always clear.

Kennedy and Georgia were playing dolls.  The only boy doll they have is a Batman action figure (which Georgia bought with her own money).  He was the prince.  They were having a hard time deciding which one of the dolls got to dance with him at the ball.  The solution to their problem?  An eating contest.  They sat all dolls down at a table and decided that whoever ate the most the fastest won the dance with the prince.  They all tore into plastic turkeys and vegetables and in the end were all too full to dance.

Another problem I have is that Georgia has recently become very concerned with the size of her chest.  She asks me several times a week when she will get breasts.  This is alarming, coming from a 4 year old.  Her concern, though, stems from the fact that she can't feed babies without them.  She's worried that this will affect her becoming a mother someday.

I suppose it's never clear whether or not you're doing a good job at raising girls.  Chances are, you won't be present for and will probably never know about the times when your questions are answered.  I hope when that time comes, I will have done a decent job.  In the meantime, here's a great list of 10 things to teach teenage girls.