Respect: You Get What You Give

When it comes to parenting, I've given up so many things that are considered "the norm".  I generally don't discuss parenting practices in everyday conversation for fear of backlash.   It's not disapproval that I'm afraid of.  I honestly feel that I'm doing the best I can and my decisions are not uninformed.  There are times my decisions don't feel natural.  I was not raised this way, most people I meet were not raised this way.  It has taken me quite a bit of time to accept that most of what I do is natural, it's just generations of learned behavior that makes it feel like it's not.

Discipline is a tricky thing for parents.  There is so much pressure from everywhere to discipline our children.  If we don't, people assume that we are raising lazy, smart ass kids who feel entitled to have anything they want.  If children aren't disciplined, they will run wild, drop out of school, wear pants that sag and lead unproductive lives.  Most people will tell you that what is wrong with kids today is lack of discipline.

I don't buy it.  I hear people all the time complain about their out of control kids.  They're baffled.  "Why are they still like this?"  "I've grounded him."  "I've taken away all electronics."  "I've forbidden her to hang out with those people."  "She has missed out on parties/trips/fun."  "He doesn't even care if he gets spanked anymore, it doesn't bother him."  I'm willing to bet that most parents of out of control kids have tried to discipline them. 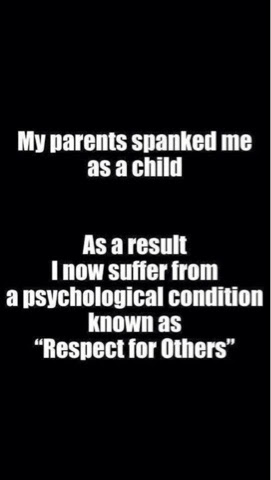 I keep seeing this pop up on Facebook and it's driving me insane.  I HATE this.  Does hitting another person really bring about respect?  As an adult, if my boss or my employee is disrespectful or not doing their job right, can I smack them to fix the situation?  No.  Hitting does not result in respect.  The results are fear and lack of trust.  I do not believe that it fixes any problems.  The result is lies and sneakiness.  You only try harder not to get caught.  If spanking truly solved any problem, it would only need to be done once in each lifetime.

I don't discipline my children.  I don't believe that it really solves anything.  When Corrina was younger, I disciplined her.  We did time out, I took away TV or computer, I spanked her once.  It was a never ending cycle of anger and frustration for us both.  I realized the other day how much easier life with her is than it used to be and it started getting easier when I gave up the idea of discipline. We are happier and have a much better relationship.

I am far from perfect.  I yell too much, which is something that I'm working on.  I have swatted one of the girls on the behind in the last year.  I felt horrible after.  When we calmed down, we sat down and discussed it.  I apologized.  We talked about how everyone has limits, everyone gets frustrated and angry.  We talked about how it is never OK to hit when you're frustrated or angry.  We learned that adults and children aren't always that different.

Does all of this mean that my children do whatever they want or have never heard the word "no"?  No.  My children are pretty well behaved and trustworthy kids that are no strangers to disappointment or the word "no".  I try not to expect more than they are capable of at their ages.  We discuss, we teach, we learn, we work things out together.

Does this mean that my children feel entitled?  I hope so.  They should feel entitled to:  make their own decisions, have their own beliefs, be themselves, make mistakes, be respected by others (including adults), dream big, test limits, learn from their mistakes and just be children.

Are there things about your parenting strategies that you hide from others?  Are there any questions I can answer about our lack of discipline?  Feel free to weigh in with your opinion.
posted by Brandi at 10:00 AM No comments:

The Time My Daughter Put Me In My Place 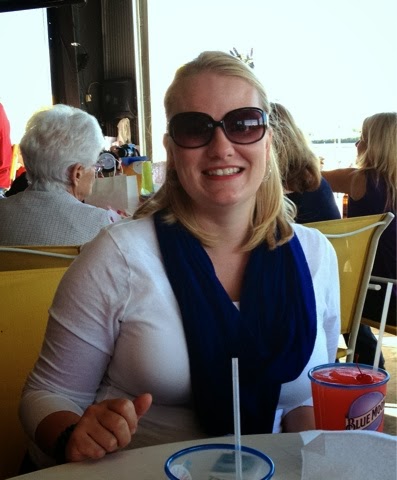 After giving birth to 4 children, it's true that I've let myself go.  I don't leave the house much and can usually be found in a uniform of yoga pants and too big t-shirt.  It's hard to find time to exercise.  It's true.  Finding time when I'm not expected to be doing something for someone else is difficult.  Also, my days are spent at the mercy of a 2 year old who can be tyrannical at times.

Yes, I use my family as an excuse for my weight.  They put it on and they won't give me time to take it off.  This is something that has really come back to bite me in the ass.

I had to seriously consider this.  She said it would mean a lot to her.  The moral of my story is this:  these children made me fat (kind of) and now they're going to get me in shape.  I can't tell my daughter no.  I told her that I would do my best.  If I can't do this one, I will do one with her before summer is over.

So, I am going to make some changes and invest in a good sports bra.  I've packed on around 45 pounds in the last 8 years.  45 pounds!!!  It's really hard to believe when I see Corrina wearing clothes that I wore after she was born that I could ever fit into them. 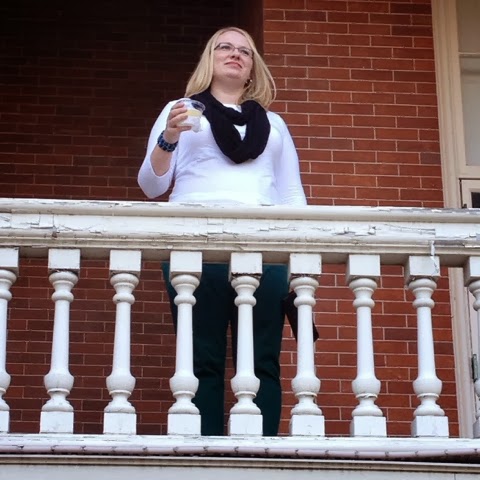 ps: I honestly can not wait for a day when I can leave the house without spanx.  THAT will be truly amazing!

posted by Brandi at 7:00 AM No comments:

Last week, I mentioned that we do movie night every once in a while and what we eat that night depends on what movie we watched.  Last weekend, we watched The Priness and the Frog in celebration of Mardi Gras.  I don't know why I love this movie so much, but it's one of my favorites.

It was easy to find Mardi Gras decorations over the weekend.  I didn't go overboard because I didn't want to spend a ton of money.  We just put up some purple, yellow and green bunting, used purple table cloths, Mardi Gras themed plates and napkins.

For a craft, I cut shapes out of cardboard that they painted and decorated with jewels, glitter and flowers.  I glued them to a dowel when they were finished.  This took them quite a while but I printed coloring pages for them to color while I cooked. 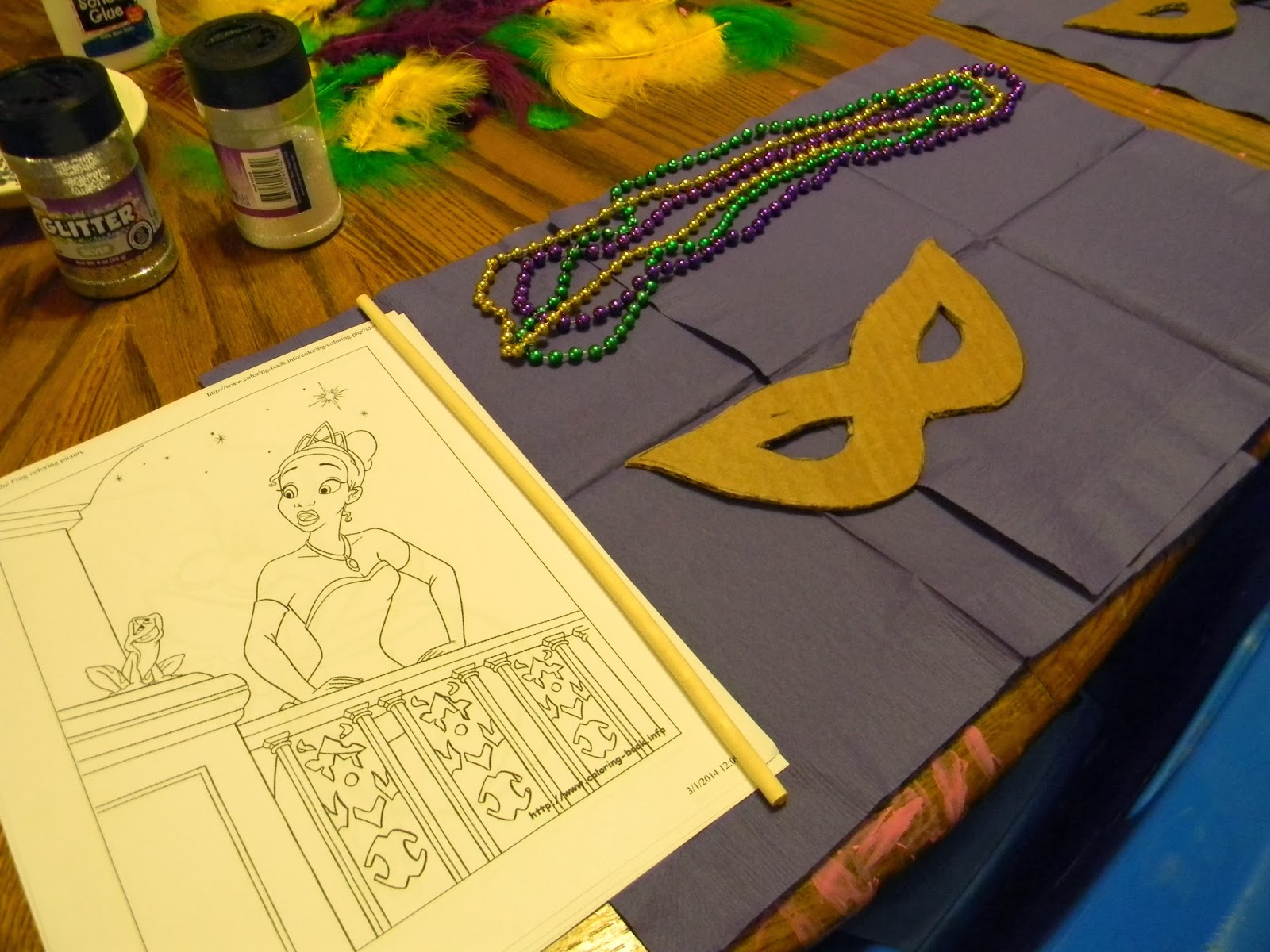 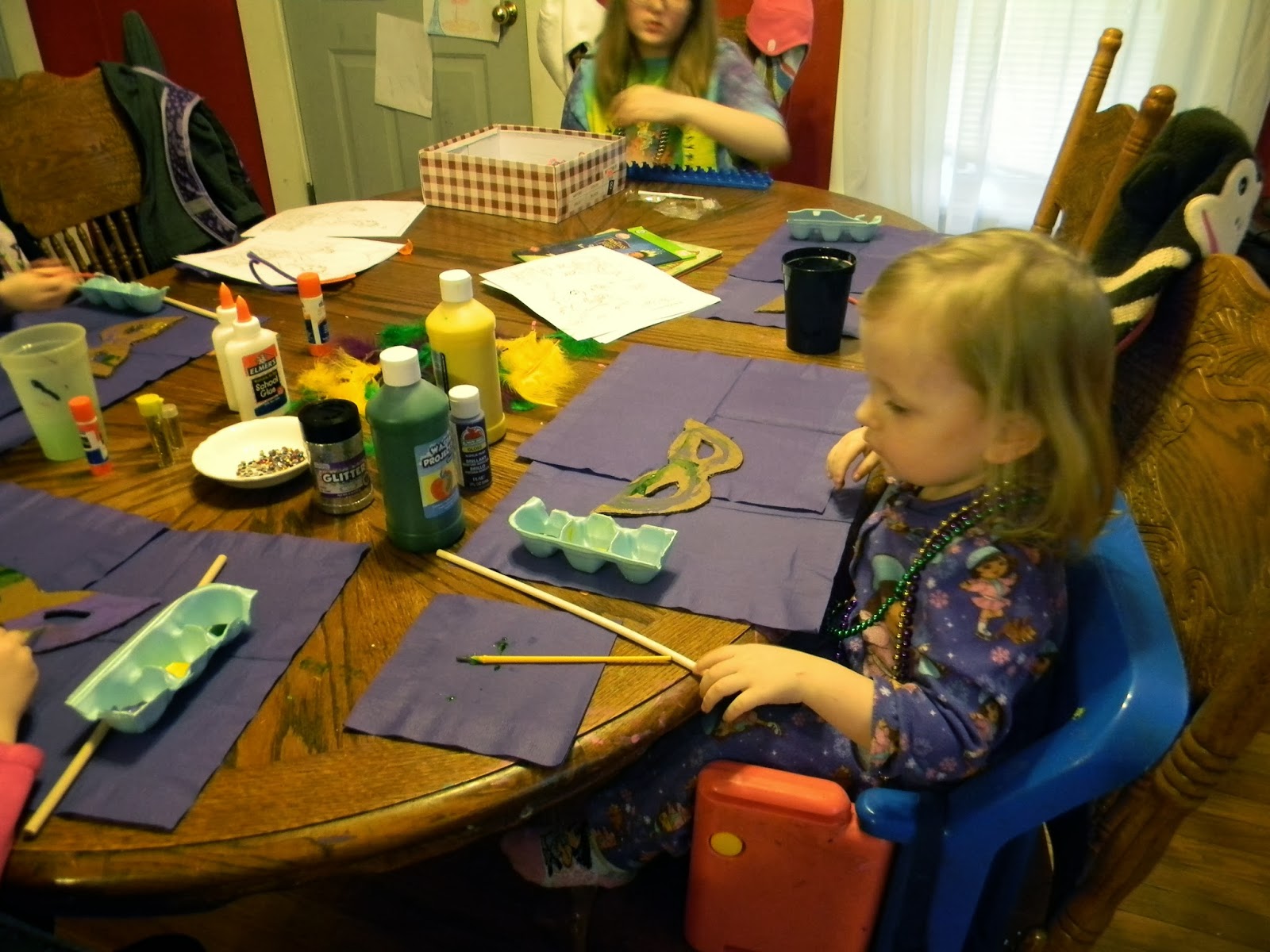 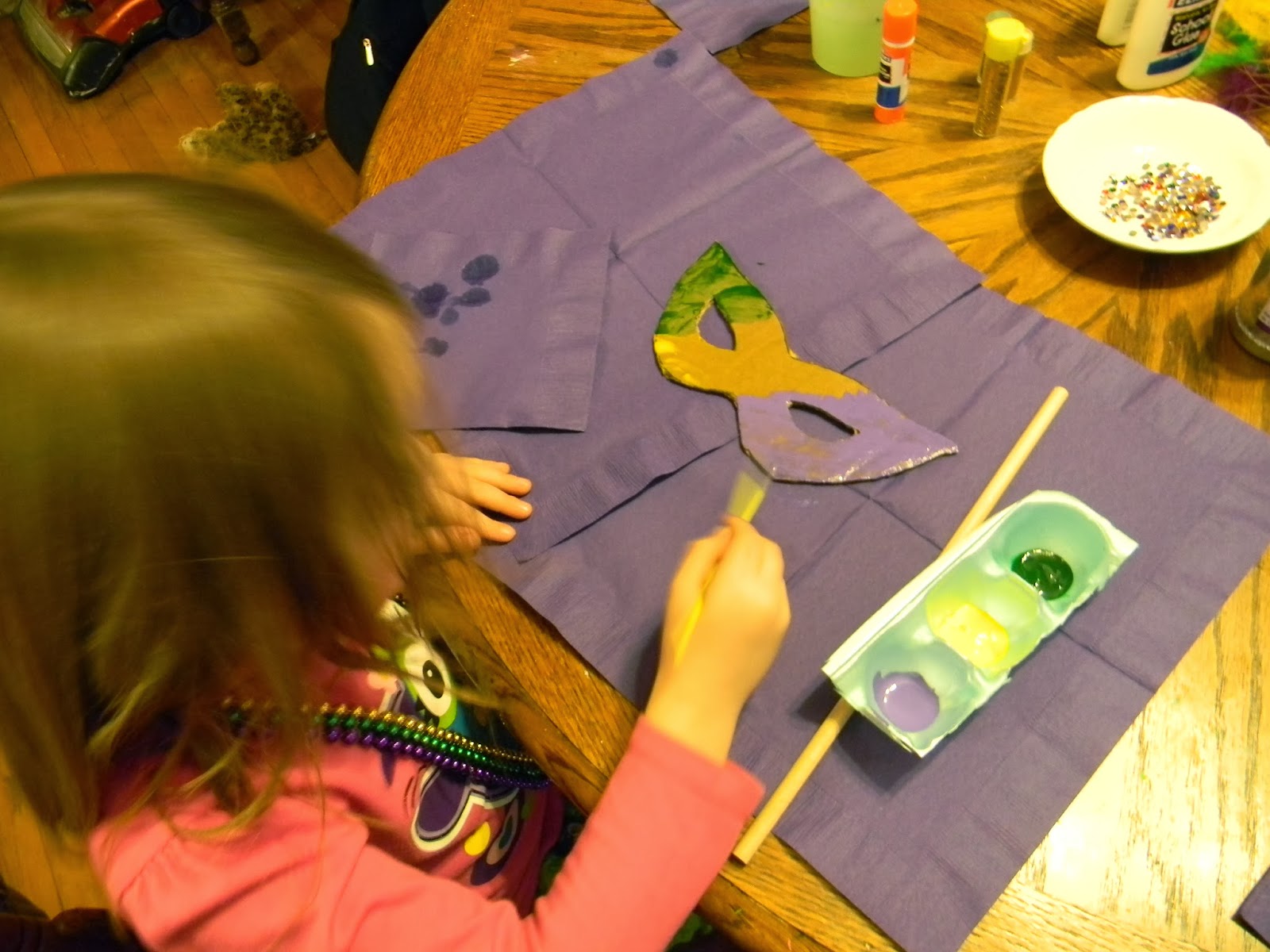 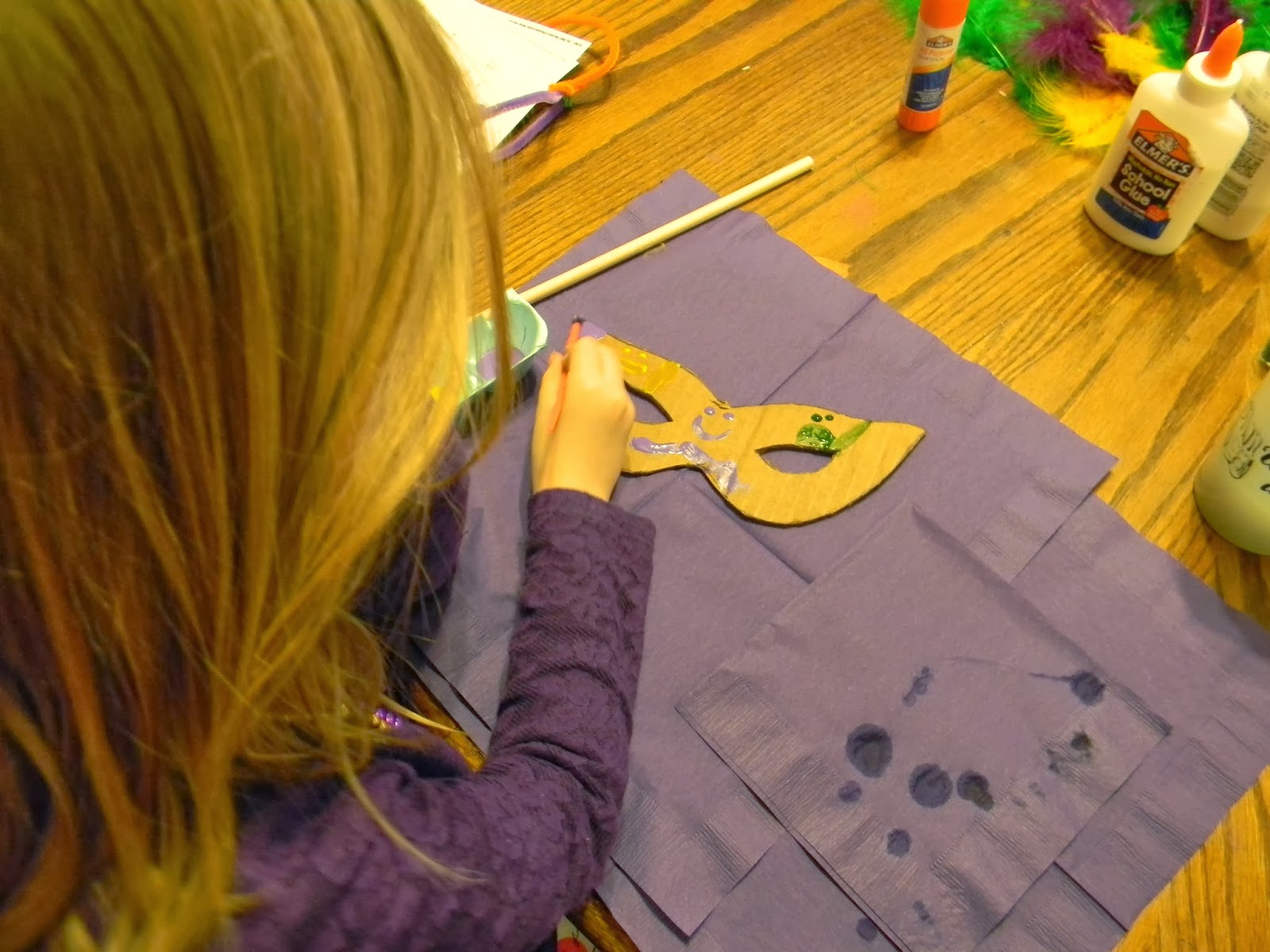 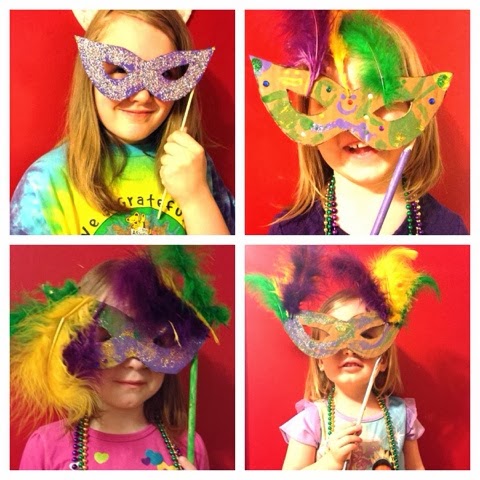 For dinner, I wanted to make a more traditional New Orlean's meal, but I have picky children.  What we ended up with was Dr. Facilier's Fried Frog Legs (spicy chicken strips), Ray's Firefly Rice, Louis's Louisiana Cornbread, Tiana's "Man-Catching" Beignets and Big Daddy Le Bouf's Mardi Gras King Cake and Mama Odie's Swamp Water to drink.  I really had a problem even suggesting the chicken was frog legs, but lack of time and imagination got the better of me. 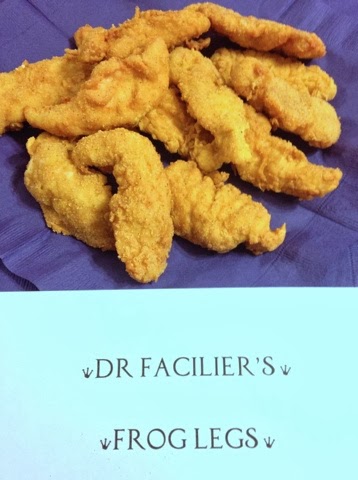 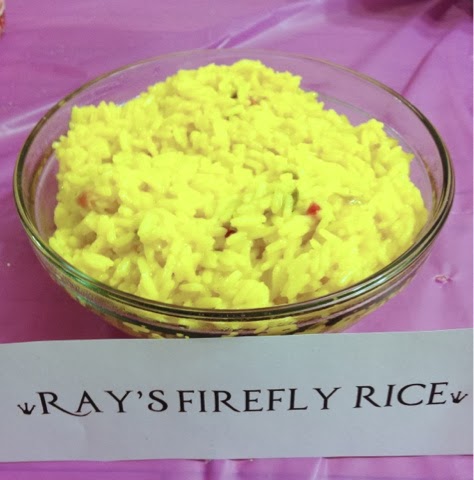 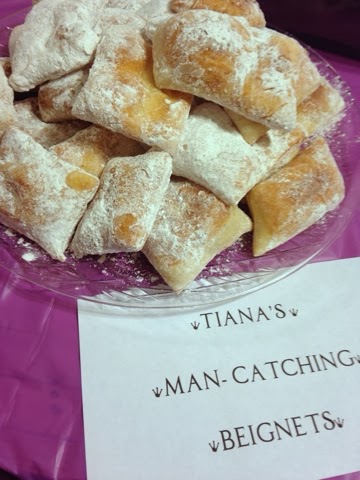 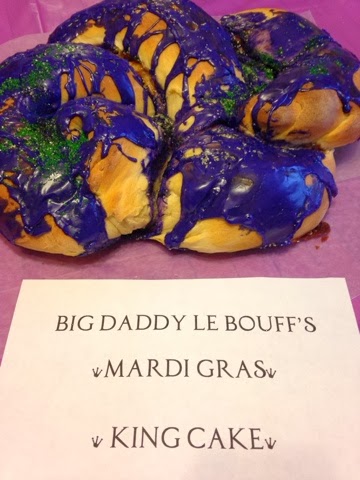 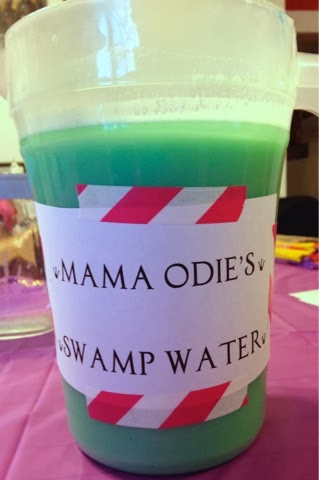 My king cake was the ugliest thing I've ever seen.  It tasted great and looked good on the inside, but I don't think I rolled my pieces tight enough.  To top it off (literally), I colored my glaze purple to make up for my lack of purple sugar. Not a good idea.

All in all, it was a pretty good evening.  Sorry for my terribly awful pictures.  They were taken with my iPhone after I deep fried 2 of my fingers making the beignets.  I promise this is something I will remedy in the future.  Both the pictures and the frying of the fingers.
posted by Brandi at 7:00 AM 1 comment:

Oh, bedtime, that magical time of the day.  That time that, I admit, I sometimes find myself longing for the minute I wake up.  I love sleep, even if that love sometimes feels unrequited. I feel that there is this myth among mothers, though, what bedtime actually looks like.  I worry that there is an ideal that moms (especially new moms) strive for.  Even I still have fantasies of tucking all kids in bed at 7:00, saying goodnight and enjoying some time with my husband while they drift off to dreamland, not to be heard from until 7:00am.  Bedtime looks different in every house.  Here's a peak into ours.

I take 3 of our girls to bed between 6:30 and 7:00 and I stay there with them until morning.  Sometimes we read or watch some TV before falling asleep.  They get up a million times to go to the bathroom, or downstairs to bug their dad for snacks and drinks.  When they are asleep, I use my phone to read my own book or catch up on whatever show I'm behind on.  Once a week, I leave the house and my husband gets to do it. 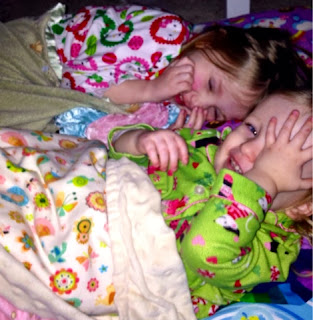 We have a small house.  I'm sure when my husband bought it, it was listed as a 3 bedroom.  I'd maybe call it 2.5.  Our oldest daughter has her own room.  However, it is just big enough for her.  The three youngest girls share a room.  My love affair with sleep was part of the reason I slept with my last two babies from the time they were born.  We have been co-sleepers of some sort for a long time.  The only thing keeping us from sharing one family bed is my husband's sleep apnea, which he refuses to do anything about (probably so he can have a bed all to himself).  So, as of now, I sleep with the 3 youngest girls in their bedroom.  The driving force behind this is our youngest.  She's not quite 3 yet, still nurses at night and isn't quite ready to sleep on her own yet.  So, for now, Kennedy (6) and Georgia (5) sleep in bunk beds and Stella and I sleep on a mattress on the floor.

Lately, Kennedy has been having difficulty with nightmares and has been sleeping at the bottom of Stella's bed.  When this started, I had a new appreciation for a family bed, or in our case, a family room.  When I was a kid, I dreaded bed time.  I was so scared to lay in my bed with the door closed.  Every noise was some unknown monster coming to get me.  Every night, I would lay in bed and wait for my mom to turn the tv off.  When she did, I would slowly and quietly make my way out of my room, across the living room and into her bed.  This took a while because if she woke up, she would send me back to my bed.  I love that my children don't have to do that.  They don't have to be afraid of the dark because I'm right there with them.  Every time I start to doubt our nightly arrangements, someone will wake up in the middle of the night and say "mom?".  When I answer, they go back to sleep.  If my being there reassures them, I will do it until they go to college.  Ok, maybe not.

Every couple of years, our sleeping arrangement changes.  I won't always sleep with my children.  Someday soon, Stella will be big enough for her own bed and Kennedy's nightmares will stop.  I'll be back in bed with my husband and he'll have to finally address his apnea issues.  For now, though, I will cherish this time and what makes us different from other families.

What does bedtime look like at your house?  Do you get that coveted time to yourself before you go to bed?  Do you or would you sleep with your kids?